We arrived in Sydney to check out this amazing city.  Sydney is a huge city that offers some great sights and attractions.  The main thing to see that everyone knows about is of course the Sydney Opera House, one of the top contenders for the “8th Wonder of the World” (my apologies to all of the Andre the Giant fans out there).

As you walk around the harbour, you can start to get glimpses of this amazing structure.  61 years ago (1954), the City of Sydney held a competition for designs of a new performing arts theatre.

And now for a night shot.

The selection committee had chosen this waterfront site as the perfect location (this spot used to house a train station).  233 entries were submitted from 28 countries as the designs poured in and the judging panel went through each of them to separate them into a “maybe” pile and a “no” pile.  The design we see today was originally placed into the “no” pile, but one of the judges was late to the selection process and demanded that he see every entry.  Once he saw this entry he immediately proclaimed “Gentlemen, this is the winning design!” against all of the contest rules.

The panel then decided to allow it to proceed into the next stage and it was eventually proclaimed as the winner.  It was designed by Danish architect Jorn Utzon and he had no idea how to make this design structurally stand.  See his submitted design drawings below. 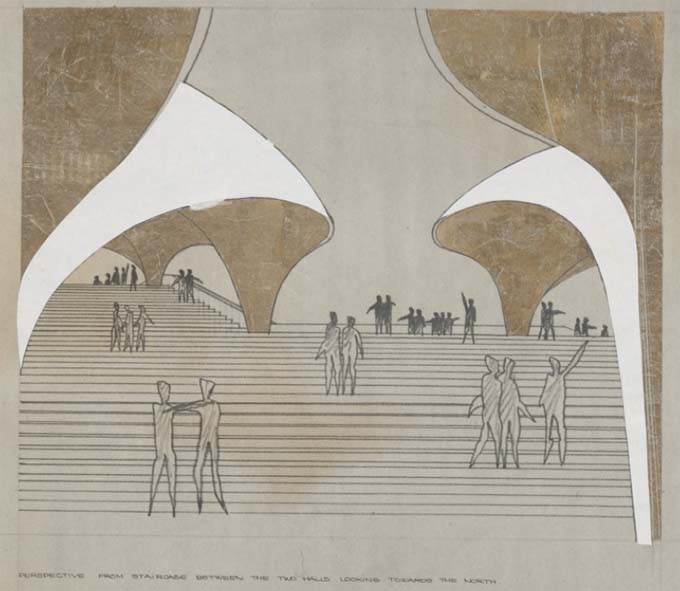 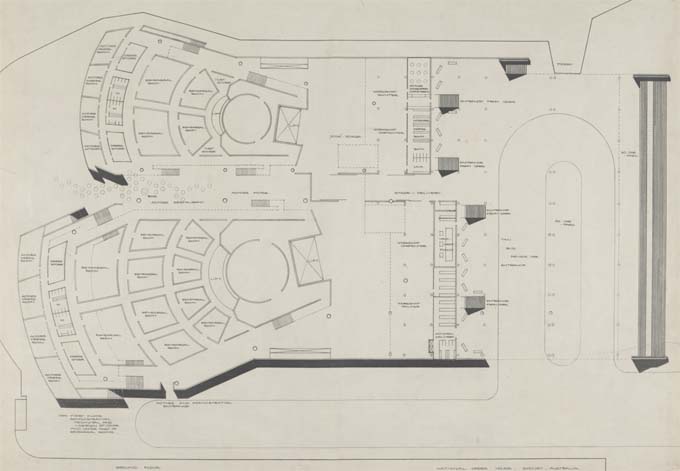 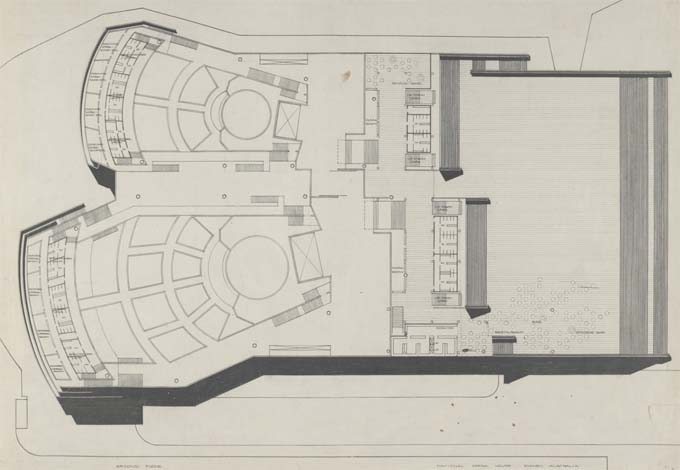 The structural engineer submitted multiple different structural design schemes, but all were rejected by Mr Utzon.  He wanted no columns anywhere within the building so no views were obstructed.  Eventually a post-tension design was conceived where tightened cables within the concrete shell would support the roof in the sails shape without any columns.  You can see the concrete ribs in the interior picture below.  This is where the steel cables are embedded.

The project was to cost $7,000,000 when it started, but it spiraled to over $50,000,000 before the interiors were even stared.  This brought a new government being elected and thus began the political interference with the designers.  Mr Utzon walked off the job and a different architect was hired to develop the interiors.

The design includes a Concert Hall on the west side and an Opera Theatre on the east side (both interiors are very, very similar). 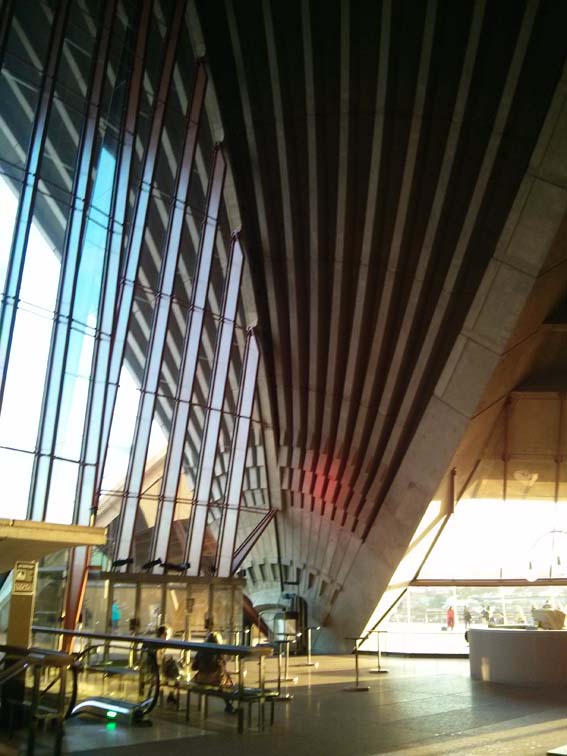 Only natural type materials are used.  Lots of wood! 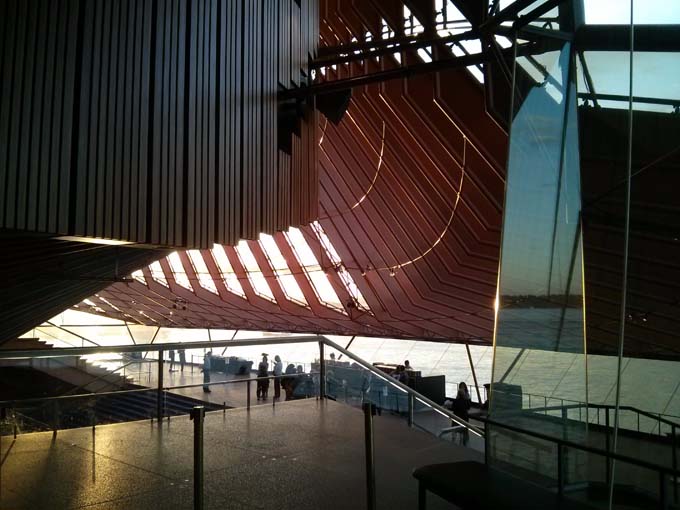 Under the west side Concert Hall is a smaller Drama Theatre called the Playhouse.  This space has red seats that can be added/removed based on the activity being performed.  The band Coldplay recorded a live album in this space.  Other examples of activities here have been Cirque du Soleil (the very high ceiling space is perfect for throwing people up in the air), and as a bar for major events in the theatre, among plays of course.

The Concert Hall (Symphony Studio) contains a flexible design to adjust as the performers require.

There are domed lights (they are blue when activated, you will see in two pictures below this one) that act as a sound reverberation device to allow the performers a chance to hear the music in time to stay with the rhythm.  If these weren’t there then they would hear the notes just late enough to miss their cues (which is why they follow the conductor).

Just walking through these spaces isn’t enough…we chose to take in a performance at the Sydney Opera House.  Why the heck not???  We chose to buy tickets to the “Tapestry of Sound“, which was an impressive event.  Over 1,000 performers (that is not a typo) came together to take turns on 16 musical selections to cover the following: opera, choir, violin soloist, vocal soloist, classical music, rock n’ roll music, spoken word, latin music, African music, African dance, piano, guitar, full orchestras, cello, drums, and a final number with everyone together.  It was very well done and we really enjoyed it.  They did an orchestra and choir combination to the James Bond song “Skyfall” that was quite impressive.

Below is a pic of people filing in before the event started.

One of the performing groups are seen below under the activated blue lights.  This young group performed “Concerto for Two Violins in D minor“.  Yes, I see that there were more than two people performing.

The Sydney Opera House also has a very good (but ridiculously expensive) restaurant under the entrance platform.  We found a deal online where we got the tour tickets and the three-tier food platter for a big discounted price.  We ate this before the performance, but normally they charge $70 for this platter!  Absurd!

It had beef and chicken sliders, fries, two different sushi, two different prawn dishes, potato chips, and two different dumplings.  It was good, but certainly not worth their normal price.  I am glad we ate here for the experience and even happier that we got it all at a big discount, but I wouldn’t recommend eating here unless you want to spend big bucks for average food.  Just being honest people.

The Sydney Opera House deserves its own blog post, as its simply an inspiring structure in the perfect setting.  I truly believe that great architecture must be derived from the site…not simply a building conceived in a vacuum and then plopped onto any site that comes up.  Feel free to argue with me on this, but taking a design and saying it can be incorporated anywhere in the world does not give justice to the identity of that particular site.  This building is the perfect design for the perfect location.