Hyde Park was just north of our accommodations, so we started there.  At the south end of the park is the ANZAC (Australia & New Zealand Army Corps) War Memorial monument.  Its a beautiful structure was opened in 1934 and is the main commemorative military monument of Sydney.  It is a physical expression of the spirit and legend of ANZAC, decicated to remembering all Australians who have served their country in the armed forces in wartime or on peacekeeping. 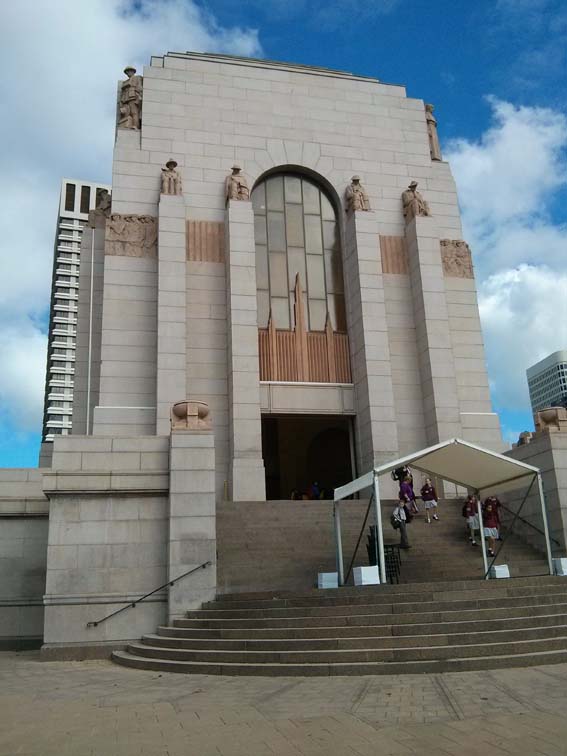 The interior of the monument is named the “Hall of Memory“, which is a circular space in diameter with a domed ceiling.  The interior ceiling is covered with the great constellation of Stars of Memory.

The marble walls of the interior are bas-relief panels depicting the Army, Navy, Air Force and the Army Medical Corps.  These bas-reliefs depict the figures of men and women resting after their hardships.

The center of the structure goes down a story into what is named the “Well of Contemplation“, which is home to the sculpture “Sacrifice“, which encapsulates the message at the heart of the ANZAC Memorial.  It is based on the story of the Spartan warrior from ancient Greece.  Young Spartan men were raised to believe that when you march out to war you either return home with their shield or on it.  This was a warning to be victorious or die in the attempt.  This statue symbolizes the Spartan warrior being returned to his loved ones dead on his shield to evoke the emotion experienced by the families of the young men who does in World War 1.

As you walk into Hyde Park, there are areas of well manicured vegetation and walking paths/benches.  Its a very popular space for people to hang out or have their lunch breaks.  Its a quiet and serene space within the busy downtown city core. 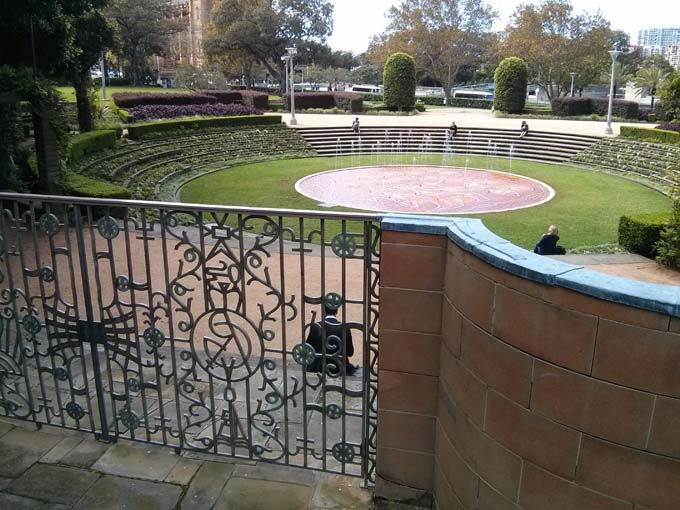 At the north end of Hyde Park is the J.F. Archibald Memorial Fountain.  At the top of this fountain stands Apollo.  Apollo holds out his right arm as a sign of protection while holding a Lyre in his left hand.  At Apollo’s feet is a semicircle to represent the star of the day.  Horses’ heads below his feet represent the horses of Apollo’s chariot.

The base of the fountain is divided into three groups.  One group represents sacrifice for the public good:  Theseus and his vanquish of the Minotaur.  The spirit triumphs over the beasts of the world.

The second group (on the right in the photo below) represents the good things of the earth.  It is the young god of the fields and pastures (pleasant countryside).

The third group represents Diana, the goddess of purity/peaceful nights/symbol of charity.  This symbolizes watching over mortals and all that stands for poetry and harmony.

The Art Gallery of New South Wales contains collections of Australian, European, Asian and contemporary art.  It wasn’t anything special, so we are keeping this entry short.

There is a very interesting Chinese Garden of Friendship located in Darling Harbour close to Chinatown.  This garden has been designed on the typical private gardens of the Ming Dynasty.  It offers an insight into Chinese heritage and culture.

The main entrance leads you to the Courtyard of Welcoming Fragrance Penjing Exhibition.  An assortment of Chinese vegetation and sculptures is a beautiful way to start the tour.

The garden is broken into botanical highlights to cover Spring, Summer, Autumn and Winter. 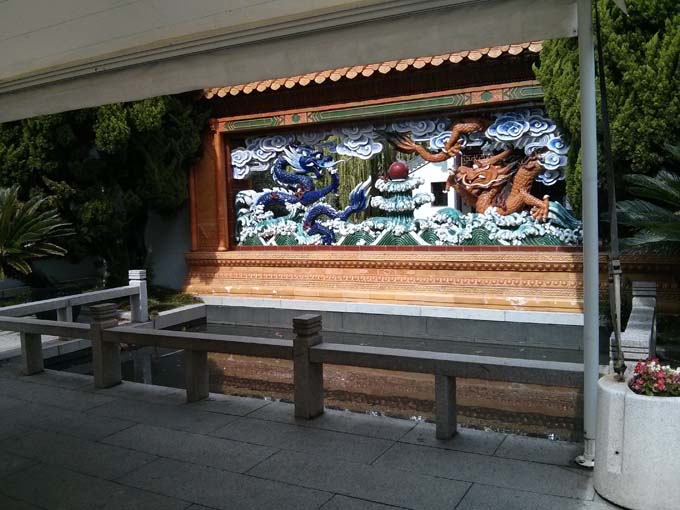 We saw an Imperial Costume kiosk in the gardens, so we took the opportunity to dress up in authentic gowns and walk around the grounds like a couple of idiots.  People commented to us at every turn and some even asked me for a prayer.  It was fun and after posing with people for their photos we will make some memories in their photo albums as the Canadians wearing imperial gowns.

Why the heck not? 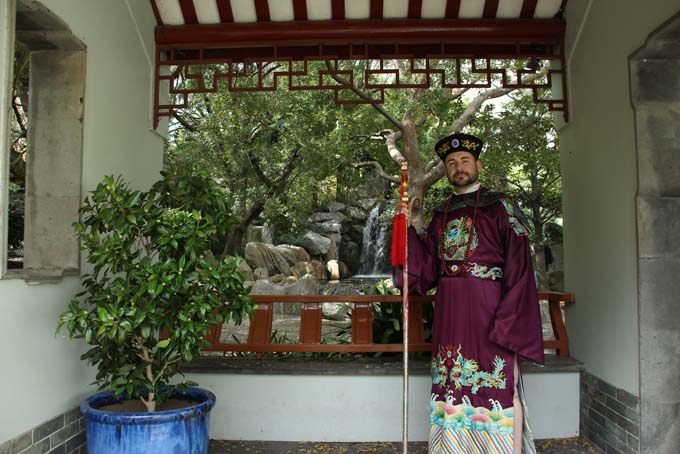 We knew of a new burger joint to check out called “Chur Burger“.  It was supposed to rival FergBurger as one of the best places to eat a burger in the southern hemisphere.  Jill had the chickpea fritter and I had the lamb burger with yam fries.  They were good, but certainly nowhere near the level of a Fergburger.

The Museum of Contemporary Art is a cool looking building, but the art exhibits inside are strange to say the least.  Perhaps I just don’t understand modern art, but see below for some stuff that’s cool and others that make you ask yourself “did someone really pay money for this?“. 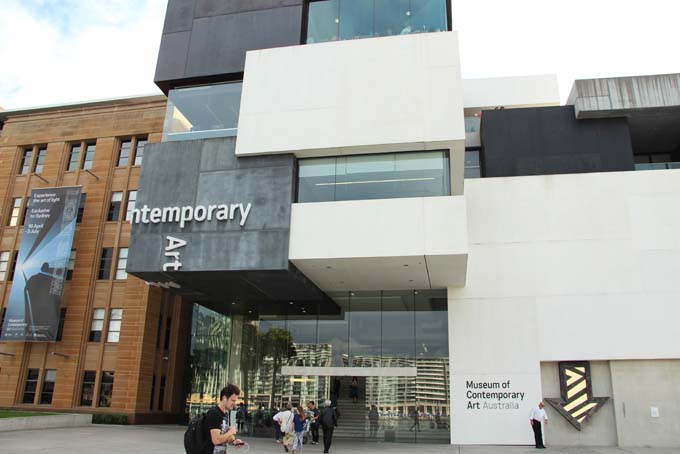 Museum of Contemporary Art – this was named “unnamed piece” since the artist couldn’t use the Spiderman name.  A Spiderman statue is looking to a head off an arm.  WTF? 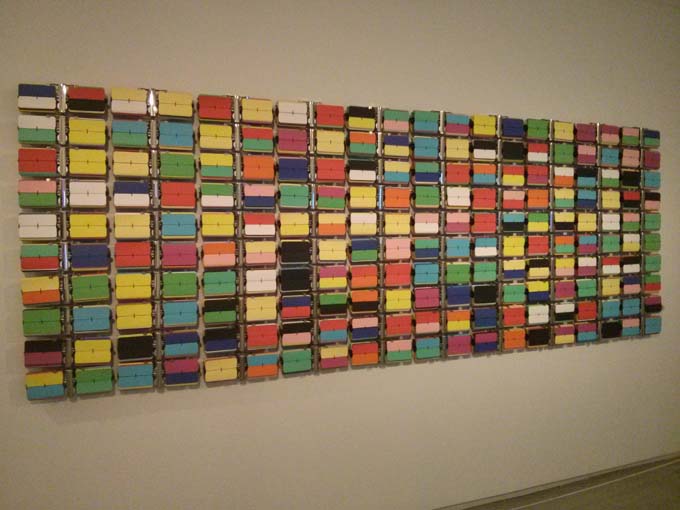 Museum of Contemporary Art – these swatches randomly flip so that you shouldn’t get the same pattern ever again. 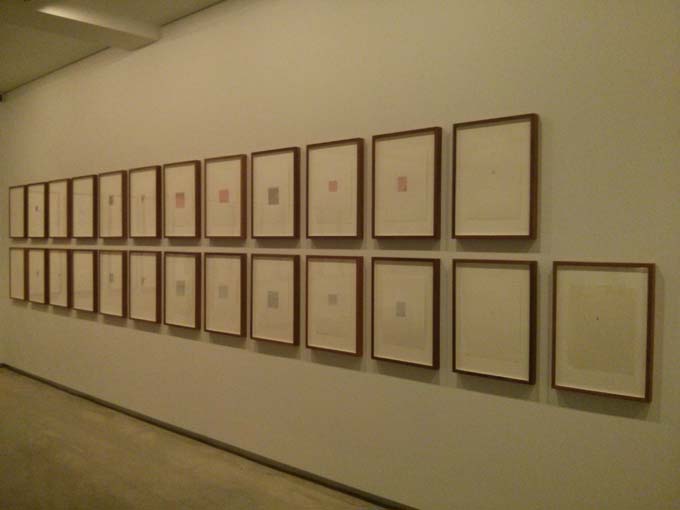 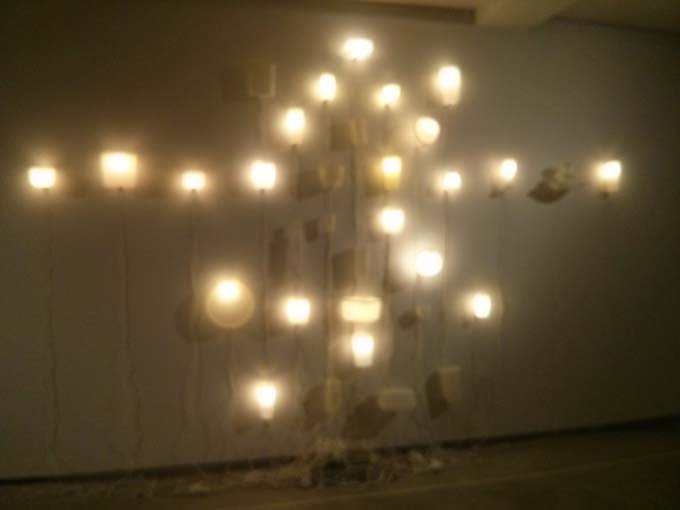 Museum of Contemporary Art – the lights come on and off randomly.

Museum of Contemporary Art – these lines were drawn right on the wall.  I used to do this in Grade 5 math class.

Museum of Contemporary Art – looks like a micro organism under a microscope.

Museum of Contemporary Art – I swear this was a scratching post.  That’s one really big cat.

We toured through St Mary’s Cathedral.  This has all of the basic elements of what you would expect to find in an old church.  Nothing really special, but it was nice. 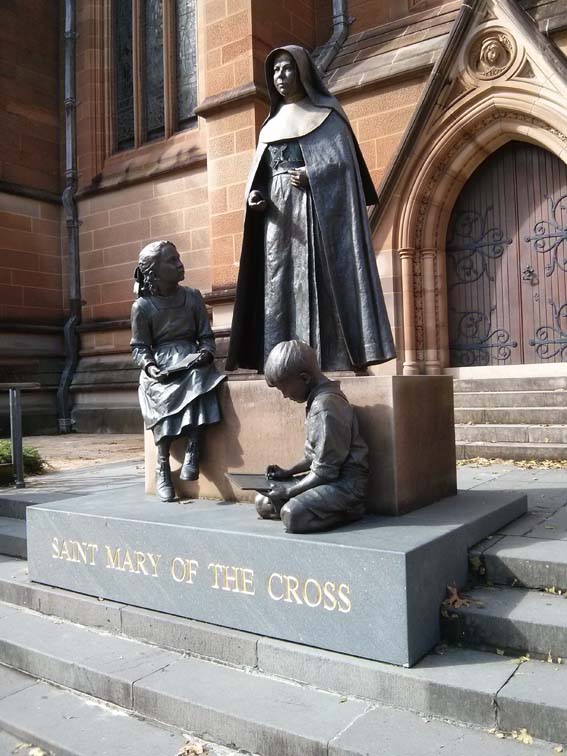 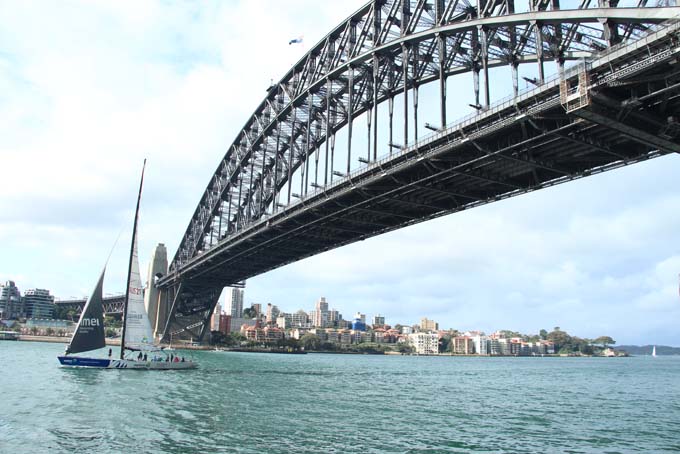 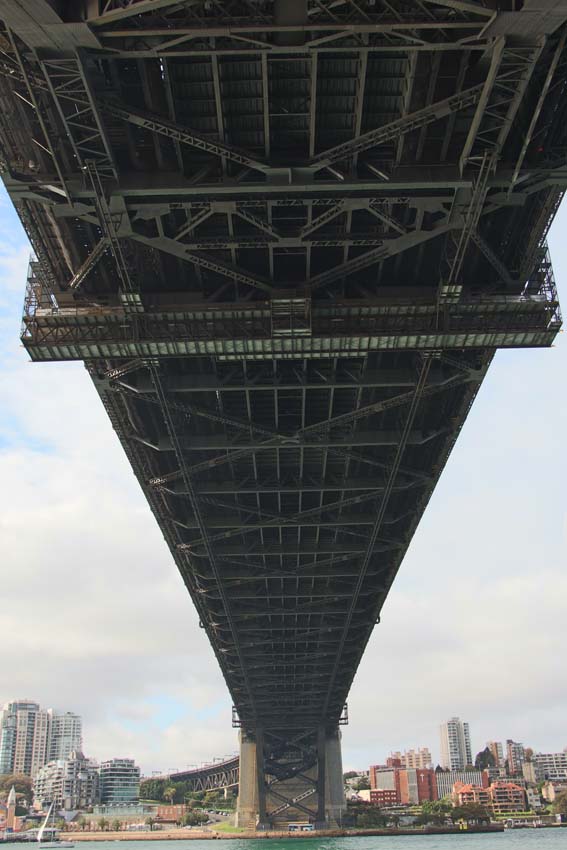 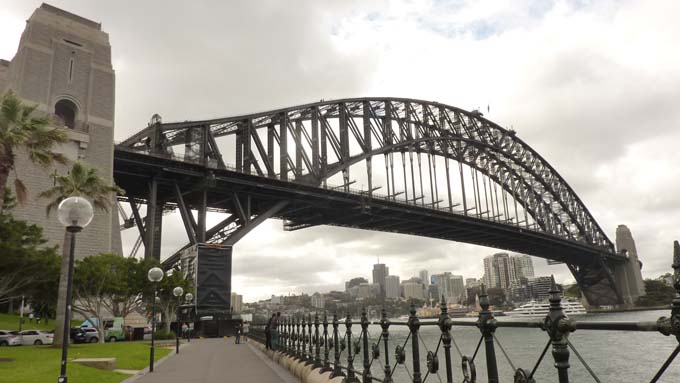 The building located at 1 Bligh Street is a 42,700 sm office building that is rounded on the exterior, but specially curved on the interior.  The main floor opens upward to a skylight and loads of glazing for the floors above.  Multiple elevators move extremely fast up and down floors, as you marvel at the organic nature of this interior courtyard.  All of the structure becomes exposed in a celebration of the truth behind this building.  It was impressive to look up and feel the moment, while busy office workers walked by in their daily hurry.  It reminds you to stop for a moment and take it all in.

The harbour has some expensive waterfront residential properties, but they have made a concerned effort to speak with a singular identity.  Here is a picture of one of the street entrances to this area.  You cannot be mistaken where you are when you see these artistic pieces.

And yet, random pieces of art can be found in the most strange places.  Artist Jimmy Durham created the piece below named “Still Life with Stone and Car“.  The car and its crushing burden sit in the middle of a roundabout on Hickson Road and they truly look as though they were designed for exactly this location.

But then a few steps further you come across Michael Snape’s “The Change“, which is an abstract work with no clear connection to its surroundings.

Other areas are celebrated with animal sculptures that look magnificent.

One Shelley Street is an impressive green building.  We were not able to get inside due to the holiday, but you can look up interior pictures for yourselves if you’re interested.  The building exceeds the highest levels of Green Star or LEED efficiency, benefiting from smart technologies like harbour water cooling, chilled beams and zone controlled lighting.  The design of this building was through utilizing Activity Based Working (ABW), a flexible platform for the financial business which needs mobile environments. 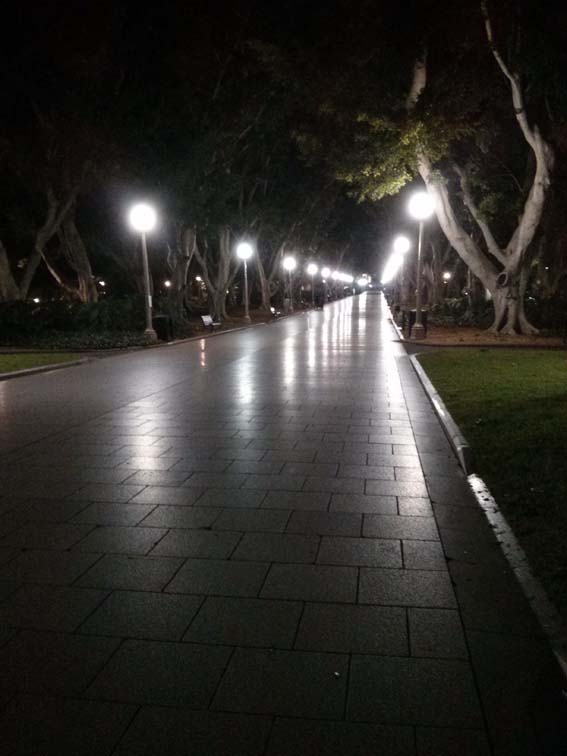 The Sydney University of Technology campus is popular for a few things, graduating Wolverine (Hugh Jackman) and for the new Frank Gehry building that people either love or hate. 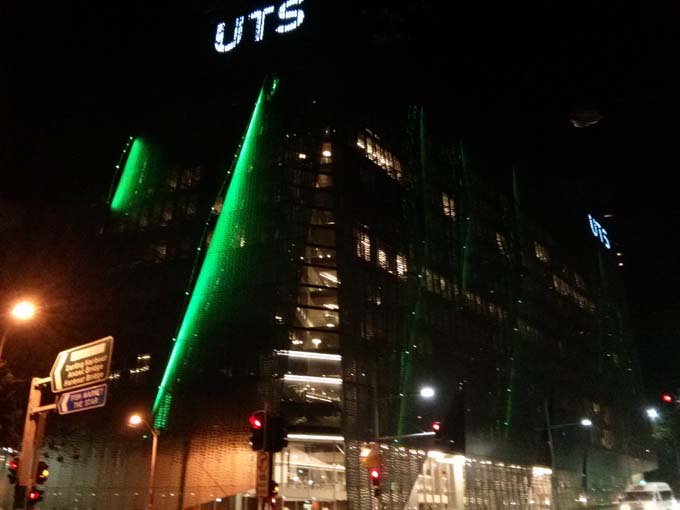 University of Technology exterior façade – you’ll either love it or hate it.

This has just been a taste of our time in Sydney.  Unfortunately, we were there for 3 days of the largest rain storm Sydney has seen in over 10 years (and the locals claimed it was one of their worst in history).  Street flooded and broken umbrellas were everywhere.  We stayed in doors, so we don’t have any pics of the flooding.  But our accommodations were on high ground and we were safe and dry the entire time.  It literally poured down heavy rain for three straight days, and this was impressive even for a couple of Vancouverites!

The end of Sydney brings us to take a night bus to Byron Bay for some sun and surfing.