Today was an interesting day to say the least.  On November 30th we rode an overnight bus to take us from Chiang Mai to Bangkok with no issues.  The fun started when we were dropped off at Bangkok.  The transport company office was closed where we were to get picked up for the next bus, with nobody to inform us of what was happening.  We were told to be there for 6:30am, yet by 8:00am the next bus still hadn’t come yet.

Then some random looking guy came up to us and asked if we were going to Siem Reap, Cambodia.  We said yes, then he looked at our ticket stub and told us to come with him.  He walked us two blocks away to a closed corner coffee shop, then told us to sit there on the street and wait for him and only him to come back.

We waited there, cautiously, as two other men came over to us and said to go to their vans.  We told them that we were waiting for the first guy we saw come back, so they stood by us and spoke in Thai to each other.  Eventually the first guy came back with two more backpackers and promptly asked me why we didn’t go with the two men to their van.  I replied, “You told us to wait for you and only you to return.”  He said that he hadn’t said that and we should know to go with these guys….seriously, how in the world would we know to go with some random guys when he clearly did tell us to wait for him and only him to return.

So at this point we have five passengers in the van plus the two drivers (they switch off every two hours to keep the driver fresh).  All five passengers agreed to obtain our own visas, so nobody was using this expensive scam visa service. 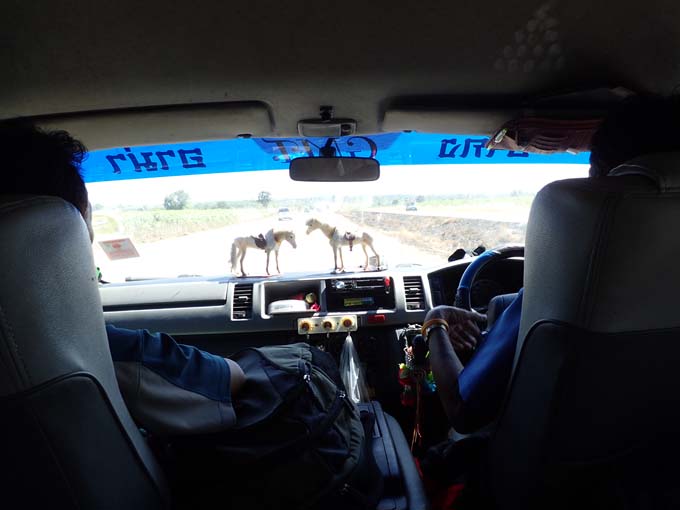 The drivers on the way to the Cambodia border.

When we arrived at the Cambodia border the van pulled up to a building and asked us to get out.  The van drove off and some guy came up to us and asked for our tickets.  We showed him our tickets and he said that he would arrange the bus transport for us on the other side of the Cambodia border.  He knew the company we were using and that five people would need bus service to Siem Reap.  He then said he needed to take the tickets to finalize the bus transport, then he showed us which direction we had to go to obtain our own visas.  We proceeded to the visa & immigration office to get our paperwork done.

We went to immigration and promptly got our exit forms and passports stamped for our departure from Thailand.  Then we walked to the visa office and the time it took to fill out the paperwork and get the visa approved was about 15 minutes in total.  It was the easiest process we have ever dealt with during this travel adventure.

We then walked from the visa office to a bus stop where a free shuttle bus would take us from the border to the Main Bus Terminal.  This was a quick ride and the whole process from getting dropped off at the border to getting off the free bus at the terminal was around 40 minutes.

The Main Bus Terminal at the Cambodia border.

When we arrived at the bus terminal we were told that we had no ride to Siem Reap.  I pressed the issue with the guy, but was told it wasn’t happening.  Another guy at the bus station who organizes taxi for tourists told us that this scam happens all of the time to tourists and if we handed over our paperwork to the guy at the border then we were shit out of luck.

The Main Bus Terminal at the Cambodia border where the bus transport people had their stories change about why we had no ride to Siem Reap. 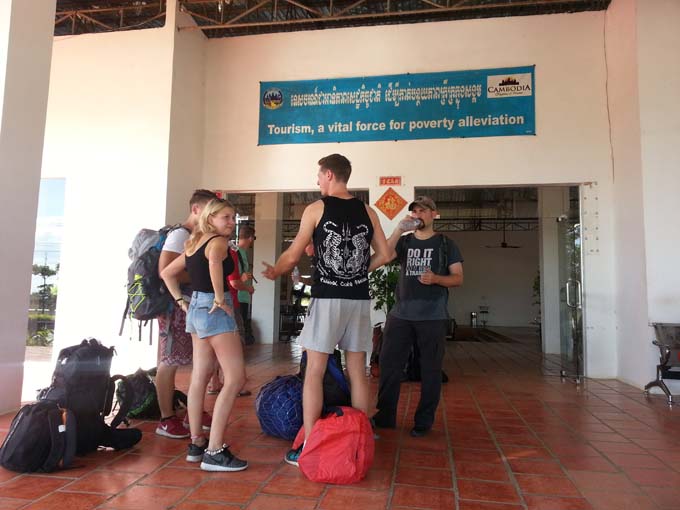 The Main Bus Terminal at the Cambodia border where the bus transport people had their stories change about why we had no ride to Siem Reap.

The Main Bus Terminal at the Cambodia border where I made the phone call to the travel agent from Chiang Mai to get pressure on the bus company from all sides.

I spoke with the tourist police, then I called the travel company agent we used in Chiang Mai to buy the tickets.  This is when the driver’s story changed as follows:

1.) We were told that because we did not take them up on their “express visa service” we lost our ride to Siem Reap.

I called bullshit on this as they never told us this was a condition of the transport purchase.

2.) Then they changed the story to be that some people were on the bus and used their visa service and we took over 2 hours to get our visas and as such held them up too long.

I called bullshit on this as I could show the time stamp from when we were dropped off to when the visa was issued, plus all five people on the bus did the visa process together on our own.  There were no other people on the bus.

3.) Then they changed their story to be that we simply did not have tickets to prove we paid for a ride.

I called bullshit on this as two of our people luckily took a phone photo of their ticket to prove we had tickets until they took them from us at the border.

4.) Then they changed their story to be that we had failed to let them explain the process of van transport to us and we did not collect a sticker to organize us onto buses.

I called bullshit on this since we stood at the building after the first bus dropped us off for enough time for the guy to look at our tickets, take our tickets, then show us where to go to get our own visas.  He had plenty of time to simply say anything about needing a sticker or anything else for that matter.

At this point the van company was getting crap from me, the tourist police, and on the phone from our travel company agent in Chiang Mai.  The van company was run by three brothers who took turns speaking with me, but I stayed calm and in control of the conversation and at each turn I exposed their lies.  The guy we first gave our tickets to at the border showed up and he tried to swear and yell at Jill, but I stepped in and shut him up in a hurry.  I kept his eyes on me and I kept reminding the guy that he had an obligation to get us to Siem Reap.

You see, since they had our tickets they could claim we took the ride all of the way to Siem Reap and get paid for transport that never happened.  Yet we had the tourist police and the travel agent all understanding that we in fact were not getting to our destination for tickets we fully paid for.

At this point I took a different approach, I pulled the one brother aside who was clearly the boss of their group and I killed him with kindness.  I told him that he wasn’t a bad man, but rather he just found himself in a situation where both sides have a misunderstanding.  He could now be the hero of this day by just putting the five of us on a transport bus and getting us to Siem Reap.  I told him I would praise him to the tourist police and leave him a fantastic reference on trip advisor as the man who saved the day for the dumb tourists.

He bought it hook, line and sinker.

He agreed to put us on the next bus, but at this point Jill and the other three people were very angry (it had been over two hours of this nonsense) and they were having a spirited discussion with the brothers about how great they were.  I stepped in and removed the brothers from the talk and told our group to grab their bags and head for the red bus.  Everyone was happy to get out of there (especially when we had been told repeatedly that we were shit out of luck) and made their way to the red bus.  We put our bags onto the bus and sat in our seats waiting for the bus to leave.  After 20 minutes the bus filled with tourists and we took off for Siem Reap…finally.

As much as we all wanted to come down on the brothers with a scorched earth policy, it made more sense to kill them with kindness to just get out this situation with our intended outcome of a bus ride to Siem Reap.  We got where we needed to and played the brothers like a fiddle to weave our way through their lies and pathetic attempts at scamming us.

I don’t place this attempted scam on Thailand or Cambodia, but rather on a group of pathetic losers who obviously do this often enough on tourists who can’t argue their way through it.  We will not let this darken our outlook on Cambodia…the people of Cambodia are known to be lovely people and we will head there with a clean slate and an open mind.