Its time to hit our southern tour of the south island, which includes a stop overnight at Dunedin.  Its a nice looking city with the main economy driven by the Hershey company factory (and many other businesses, as its a good sized city).  The Hershey factory has tours set up, so we decided to see what all this buzz about chocolate is all about!      🙂

They do not allow cameras, phones, jewelry, or anything made of glass to be on the tour.  I pinched the next two images from the internet to show something other than text. 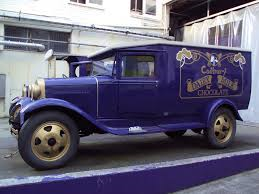 One of the original Hershey delivery cars in New Zealand

They restricted us to certain lanes and the machines were closed off by fences and plexi-glass.  None of the machines were active when we went, so if any of you go then do it in the morning and not the afternoon if you want to see the machines going.  They gave us history on the factory, the chocolate making process and of course they gave us grab bags of different Hershey’s candy.  They had a chocolate waterfall that our guide made out to be a big secret, but its shown right on the brochures for the tour…so i’m not sure why she was playing it up like that.  A cool experience, but not a must-see attraction.  In their gift shop we bought some huge chocolate bars to bring back to the Hughes brothers as a thank you for their generosity when we head back there in a few days. 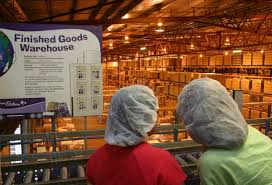 We camped overnight at the Holiday Park site in Dunedin.  They had the most beautiful campsite I have seen on this trip, but they apparently had a freak as well.  We set up our tent, then I walked down to the registration office to settle up our payment.  While I was away this kid (looked 14 but mentally seemed about 7) came out of nowhere and started watching Jill behind trees and picnic tables.  When I returned to the site she pointed him out and I went over to have a little chat.

He was sitting under a picnic table and just staring at us.  He had on a ripped shirt, shorts and was barefoot.  I approached him and asked what he was doing, he replied “watching you“.

I then asked why he would do that and he replied “a man is chasing me and he wants to hurt me, call the police“.

I asked him to come out from under the picnic table and to come with me to the registration desk for their help.  He came out and followed me down some steps but then he stopped.  I looked back and he said “what would you do if I ran away from you right now?“.

I replied, “Nothing…but I would kindly ask you to not stare at us because its very creepy and not polite“.

I replied, “No…but tell me the truth, nobody is chasing you right?”

At this point it was clear talking was getting us nowhere.  I walked back up the path and told him I was going back to my campsite and he needed to go to his parents camper.  He agreed, but 3 minutes later he was behind some small trees staring at us again.  I asked Jill to stay alert as I went down to the registration desk to speak with the owners.

The owners told me this kid was a local and lived somewhere in the area.  He had been spying on people for about 2 weeks and never did anything to them.  He said nobody had been able to approach the kid, let alone speak with him…I was the first.

I replied, “Sure…they never do anything until they do something.  When that time comes is never easy to guess…this kid is troubled and needs help, so call the police and get them in the loop“.  The owner said he would approach the area from the back to speak with the kid if I went back to my tent site.

I went back  and there he was, sitting a few levels higher and watching us through some branches.  Jill went to the lower area and I sat there looking back at him.  The kid came out and walked closer to me as he started telling me about how he watches people and likes me.  The owner then came around from the back and surprised the kid.  They had a brief chat, where this idiot owner told the kid I had complained and he was there because of me.

The kid bolted through the trees like some kind of scene from Robinson Crusoe.  The owner came down to me and I gave him the gears…”look, if you say this kid has only spoken to me and trusts me and you want to help him, why in the hell did you use me as a reason to come talk to him yourself?  If he trusted me, now he’ll be pissed off and I won’t be staying here under these conditions.  All you had to do was say you owned the camp and he had to leave, then call the police to get a file going.  To make your campers be the bad guys is complete bullsh*t.  You haven’t dealt with this for two weeks, now for all we know the kid could be pissed off and do something tonight.”

The kid needed some help and it took two Canadians to get the proper authorities involved.  Imagine that.

He offered for us to move to another spot on the ledge, but that made no sense.  We packed out stuff up and went to see the blue penguins, then returned to camp in the heart of the motor homes on the lowest level (one the kid did not venture to).  Nothing else happened and we left the next morning.

You find the nicest looking campsite and something like this happens.

The Dunedin Holiday Park campsite, we stayed in the tenting area beyond the trees

The real reason we came to Dunedin was to see the blue penguins.  See a pic below. 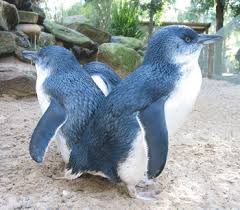 During the day they mostly swim out and gather food for the little ones (I say little ones, but the blue penguin adult is the smallest penguin in the world).  At dusk they come back from the sea to work their way up into the nesting areas in the tall grass.  The Department of Conservation established an observation post right by their path for people to witness them in action.  I got the advance inside scoop from the cashier on where to stand to get the best spot.  It worked like a charm!

The blue penguins coming in from a day of fishing

Flash photography is not allowed as it temporarily blinds them.  The pics are dark, but you can see them on the path.

The blue penguins coming in from a day of fishing

Sorry for not getting sharper pics, but it got dark out pretty fast.