Jill was intent on seeing a live rugby game…and see one we certainly did!  The game we attended was in Christchurch with the hometown Crusaders taking on the South Africa Cheetahs.  Peter Hamilton from Waimate arranged tickets for us through his sister in Christchurch, Lynn.  She was a great host and let us stay at her house overnight after the game.

The rugby experts couldn’t believe that we saw a game with the following:

1.) The game totaled 10 tries between both teams.

2.) The Crusaders scored 47 unanswered points in the second half after being down 14-10.

5.) One player was carted off on a stretcher/golf cart.

6.) One player (Dan Carter) accounted for 27 points by himself.

The fans in the stands around us kept saying “This is unbelieveable!“…and we enjoyed every second of it.  The final score was 57-14 in favor of the Crusaders. 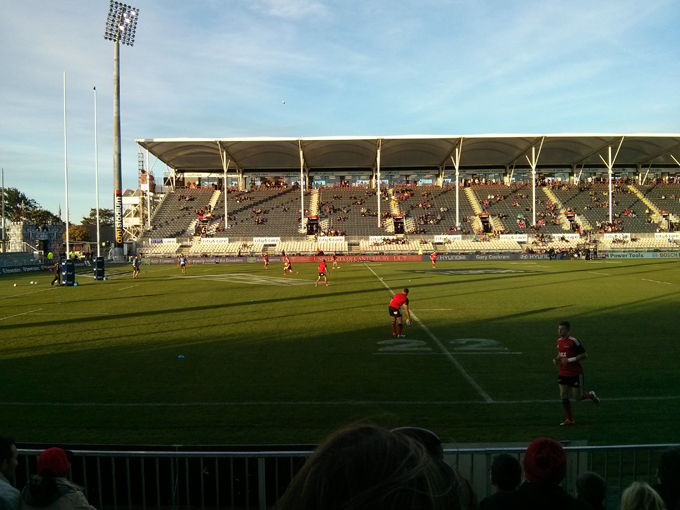 Our first live rugby game. The Crusaders have many All Blacks national players on their squad!

The Crusaders have 8 players on their squad that were also All Blacks.  The All Blacks are the New Zealand rugby national team selected off the provincial club rosters.  That’s good representation for your national team.

Lynn was an excellent host and we had to get a selfie with her.

Kenneth, our host Lynn, and Jill at the Crusaders game.

The Crusaders cheerleaders then came onto the field, named the Maidens.  They had a dance routine and it went pretty long, so my hat is off to them.

The Crusaders cheerleaders called the Maidens. I would have named them the Valkyries, but they didn’t ask me.

The Crusaders cheerleaders called the Maidens. I would have named them the Valkyries, but they didn’t ask me.

Then the horseman rode onto the field and circled it while the fans waved their Crusaders flags.

The Crusaders fans welcoming their team to the field. 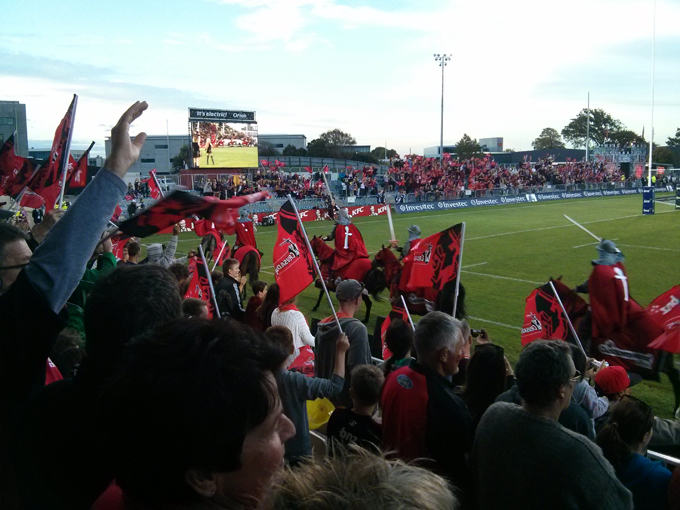 The Crusaders fans welcoming their team to the field. See the horseman at the bottom of the field.

The Crusaders fans welcoming their team to the field. See the horseman at the bottom of the field.

The set-up for the scrum.

They can get real high to reach that ball!

A close-up of the scrum.  The ref wore pink.

Then the players took the field to a great reception.  See the flames in the background.  That section with the flames had been renovated for the college students.  It’s a rowdy section with all that youthful energy, but it just adds to the enjoyment of the festivities.

The Crusaders entered the field!

It got dark quickly and the game was on.  At halftime the score was Cheetahs 14, Crusaders 10 and the game was a bit slow.  The halftime show was people in individual ZORB balls bouncing off each other to win prizes.  It was pretty entertaining, especially since we had done the larger ZORB balls on the north island.

The game really picked up in the second half with 47 unanswered points by the Crusaders as they shut out the Cheetahs in the last 40 minutes.  It was very impressive. 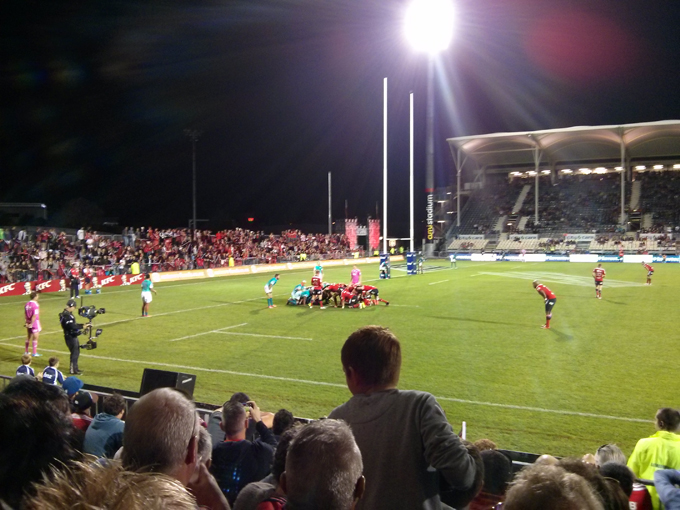 The points kept coming and coming!

After the game the two teams were pretty friendly with each other.  A classy end to a crazy game!  A great first rugby experience to get all of this in one game.

Rugby is so much better in person than on tv…if any of you go travelling then definitely go catch a live game.  You won’t regret it.