Today was a big day of driving with Peter Hughes, as we went on a tour of an inventor’s homestead and the famous Mt Cook.  Mt Cook is the highest mountain in New Zealand, measuring at 3,724 metres.  It has claimed the lives of many who have attempted to climb it (it has been climbed successfully I should point out).

At the base is Lake Pukaki, which was the site used for the “Lake-Town” in the Hobbit movie trilogy.

The village at Mt Cook has a statue to honor Sir Edmund Hillary, a local New Zealander and the first man to reach the summit of Mt Everest.

On the shores of Lake Tekapo, lies the Church of the Good Shepherd.  This church has had some very famous photographs taken of it, as the scenery surrounding it is breathtaking.

Church of Good Shepherd back façade.

Church of Good Shepherd, Peter Hughes is on the left walking towards us.

The scenery and view of Mt Cook just leap out at you.

View around the Church of Good Shepherd

Similar to previous postings where the people of New Zealand create monuments to recognize the animals who have assisted to shape this country, here we find one dedicated to the sheep dogs.  A vital companion to any sheep herder.

Sheep Dog statue at the Church of Good Shepherd

We spent some time at the homestead of inventor Bill Hamilton, the inventor of the jet boat and other technologies.  His nephew now resides at the working farm and he welcomed us with tea and biscuits to talk about Bill Hamilton and how this farm came to be.  He is the man in the hat infront of the house window.

The Hamilton family welcome us to their farm.

We toured through Bill Hamilton’s workshop, where he created linked chains held off trees to transport heavy machinery (before the time of hydraulics).  He was quite a skilled blacksmith.

He was always tinkering with different ways to do things.  Bill Hamilton was quoted as saying “I just thought of what I wanted to have that didn’t exist, then I challenged myself to make it.  I figured if I wanted it then someone else would want it too“.  Indeed a good philosophy. 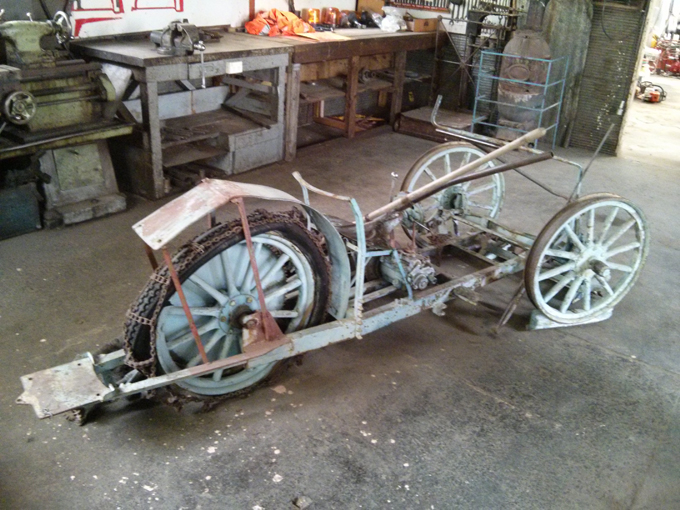 At the age of 8, Bill Hamilton decided that he wanted electricity on the remote farm.  He diverted a stream by digging a long trench by shovel (many miles) and creating a small hydroelectric generator all by himself.  Again, he was 8 years old without any formal education.  Some people are just born with it. 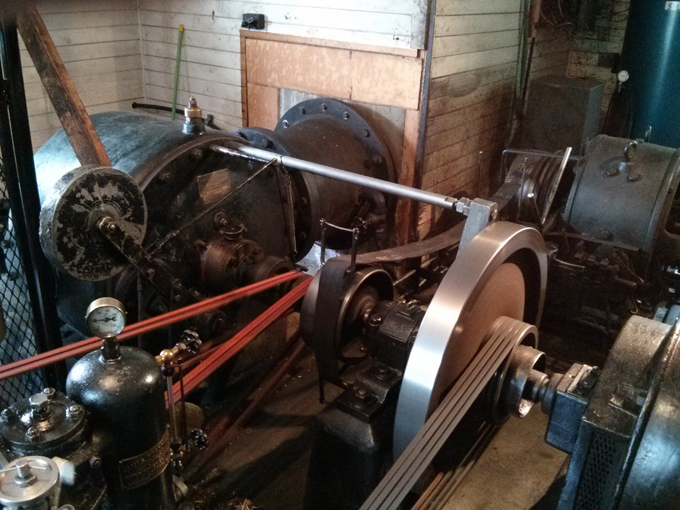 Years later Bill Hamilton added a regulator that can be set at different electrical outputs.  He wanted to ensure that if the water level was low one year then he only used what he needed.  He changed the setting to allow more or less water through the turbine, thus only taking what they truly needed.

As he grew older he travelled to England and was overtaken by the speed of their automobiles.  He tinkered with cars and upon returning to New Zealand he set a local land speed record.  Bill Hamilton then created some earth-moving machines and patented the technology and leased it to the New Zealand government.  He then turned his attention to boats, more specifically how to get boats down thin and shallow rivers without a propeller.  He built a huge lake, using his earth-moving machines, and tested his boat ideas out on it.  He would tether a boat to the dock and measure the power output.  This is where he realized that pumping water would result in a faster boat without the use of a propeller, thus allowing jet boats to travel on as less as 4 inches of water.

As his technologies become larger, he brought on hired men and women to assist.  He felt it was his responsibility to entertain them, so he built a skating rink for winter use right on the farm.

The location of Bill Hamilton’s ice rink for his employees to remain entertained back in the day.

The farm itself is still active, as they raise sheep there today.  One sheep was obviously a pet (bottle fed), as it had no fear of Jill.  Sheep typically run at the sight of anything.

Jill getting close to the livestock.

She even got cornered at one point, thankfully she had that tree to spin around.      🙂

The sheep followed her right back to the bridge crossing on the farm, a weird feeling. 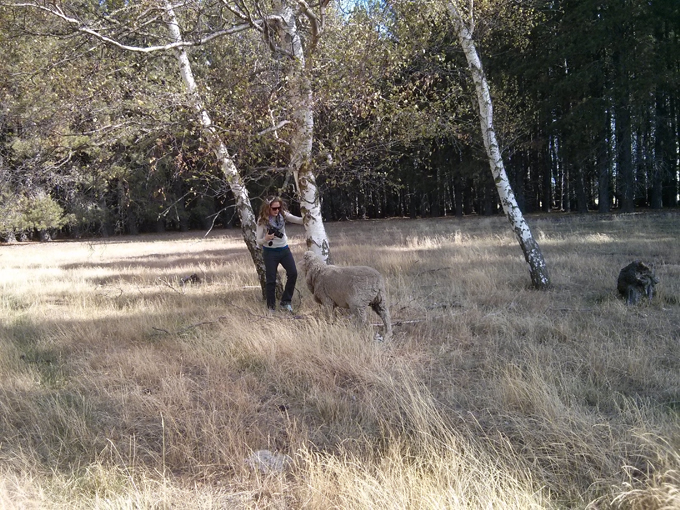 It was a long day, as we arrived back at the Hughes residence after 10pm.  That was the night New Zealand beat South Africa in the semi-final of the Cricket World Cup.